‘What I learnt from my father was your conscience, was your politics,’ said Ms Roshan Dadoo, the daughter of Dr Yusuf Dadoo, speaking at the annual Phyllis Naidoo Memorial Lecture on UKZN’s Westville campus.

Yusuf Dadoo of the Transvaal Indian Congress was a signatory to the Three Doctors’ Pact signed in 1947 which sought to unite Africans and Indians in the struggle against the apartheid regime. The Pact formed the basis of united action in the 1952 Defiance Campaign and the 1955 Freedom Charter.

The other two doctors who signed the pact were Dr Alfred Xuma of the ANC and Dr Monty Naicker of the Natal Indian Congress.

‘The spirit of non-racialism was about building unity across gender, race and class,’ said Roshan Dadoo.

‘It was remarkable that activists, including our fathers and grandfathers, brought this about during apartheid given the oppression and brutality with which the regime tried to keep people apart.’

Speaking at the same event, Mr Mthetheli Xuma, representing the Xuma family, cautioned against the domination of a race and emphasised the importance of equality. ‘The colour of anyone’s skin must not be used to marginalise people, both Black and White,’ said Xuma.

He appealed to all present to promote non-racialism in order to build a prosperous South Africa. ‘At this juncture, our country is characterised by three challenges – unemployment, poverty and inequality.’

Dr Kreesan Naicker said his father, Dr Monty Naicker, was born in 1910, the year that the then ruling party legalised ‘racism, national oppression and class exploitation of the Black majority.

‘African, Indian and Coloured people found themselves voiceless and voteless in the land of their birth,’ said Naicker.

He said when the Pact was signed, ‘society was deeply segregated. It took these leaders to look beyond these barriers to develop an alternative vision.’

Looking at the current climate in the country, he said: ‘South Africa is one of the most unequal societies in the world.

‘Today, in the wake of racial tensions, we have seen xenophobic violence and unwarranted stirring up of emotions by some people who lead us through generalisations in racial and ethnic terms.

‘Our colonisers were deviously clever in introducing their divide and rule polices, knowing full well that there would always be this distrust and animosity between groups.’

He referred to the following quotes from his father, which he felt were relevant in today’s political climate in South Africa:

Treasurer-General of the African National Congress, Dr Zweli Mkhize, reflected on Phyllis Naidoo’s role in the struggle and emphasised the importance of veterans as ‘they embody the spirit of what it meant to sacrifice, to struggle, to build this movement – particularly in the issues of non-racialism, non-sexism, freedom, democracy and peace’.

The theme of this year’s Phyllis Naidoo lecture, hosted by the Gandhi-Luthuli Documentation Centre, was advancing the platform of non-racialism and marking the 70th anniversary of the 1947 Three Doctors’ Pact.

*Phyllis Naidoo, who died in 2013, was awarded the Order of Luthuli in Bronze for her lifetime contribution to the struggle for gender equality, non-racialism and a free and democratic South Africa.  She also received an honorary doctorate from UKZN for her stellar role in the struggle for freedom in South Africa.

She was in exile in several countries including Lesotho and Zimbabwe. Her ardent opposition to the death penalty and campaigns to support South African political prisoners are well documented.  She was also a legal adviser to ANC President Oliver Tambo.

Her letters and papers running into several thousand items were donated to UKZN and are among the University’s prized collections.

In celebration of Women’s Month and in honour of all women who gave up their lives in the fight for liberation, UKZN’s Special Collections Gandhi Luthuli Documentation Centre hosted the 2018 Phyllis Naidoo Memorial Lecture on the Westville campus.

Dr Phyllis Naidoo was an anti-apartheid activist, lawyer, author and teacher who wrote and published numerous books which recorded the history of the anti-apartheid struggle and the selfless contributions made by activists.

The lecture, a tribute to Albertina Sisulu for her centenary celebration titled: Sisulu 100 – The Role Women Played in the Fight for the Liberation of South Africa, highlighted the role women undertook in maintaining homes while husbands were detained, speaking up for the struggle, and being the unsung heroes of the time.

Dr Annie Devenish, a researcher from the African Ombudsman Research Centre, spoke about her research on the thousands of letters Naidoo wrote to family, comrades and friends across the world.

Devenish said she found the letters insightful and the more she read, the more it helped her see another facet of the numerous roles women like Naidoo played in the struggle against apartheid. ‘This role remains under acknowledged and under-examined. There is still a lot of work to be done,’ said Devenish.

She said the letters displayed the importance of personal relationships and friendships in the struggle. They give and seek love, consolation and advice; some are a cry in the wilderness grieving the loss of fellow activists; while others give instructions on sending money to colleagues for the support of families of prisoned activists.

She said others offer instructions on school fees, birthday presents and travel; while others provide commentary on unfolding political events in the country and neighbouring territories.

Sharing fond memories of Naidoo, keynote speaker Ms Elinor Sisulu said she got emotional speaking about Naidoo because she was like ‘a mother to me and treated my husband like her son.’

Author and political activist, Elinor thanked the University for having a lecture to honour Naidoo’s legacy. In her talk, she paid tribute to women who impacted on her life and shaped her development into the woman she is today. She also shared memories of her mother-in law, Albertina Sisulu, who she says represented ‘the best of the generation of women.’

Speaking about the 1956 women’s march, Elinor said there was a need to highlight the role of all the women who were present in the march.

A signed copy of Elinor’s shorter version of Albertina Sisulu’s biography targeted at schools was handed over to Myeza for the Special Collections.

Professor Betty Govinden presented two poems dedicated to Naidoo. She described Naidoo as a woman who chose communities over her own needs and said her writings tried to ‘rescue the forgotten’.

In her poem, Govinden honoured ‘mothers of our freedom and women of yesterday’ such as Princess Magogo, Nokutela Dube, Phyllis Naidoo, Charlotte Maxeke, Bessie Head, Phila Ndwandwe, Victoria Mxenge and others.

Director of proceedings and Advisory Board Chairperson, Ms Zandile Qono Reddy shared memories of her aunt and role model, Phyllis Naidoo, while Head of Special Collections, Dr Praversh Sukram delivered the vote of thanks.

Welcoming Sisulu and guests, Deputy Vice-Chancellor for Research, Professor Deresh Ramjugernath, referred to the enormous value the University placed on the Phyllis Naidoo papers that form part of the Special Collections housed on the Westville campus.

Sisulu’s address highlighted key international relations issues facing South Africa. Referring to the Freedom Charter and the foreign policy framework developed by President Nelson Mandela, she said human rights were a cornerstone of the country’s international relations, while advancing the rights of women in Africa and around the world was another priority.

Bucking the Trump administration’s support for Israel moving its capital to Jerusalem, South Africa withdrew its ambassador from Israel altogether, a move which must rank as the government’s most robust foreign policy posture since liberation in 1994.

The Minister pointed out that South Africa currently occupied a rotational seat on the United Nations Security Council and wanted to make that tenure meaningful. Building peace in Africa was a key concern: ‘The silencing of the guns will be a priority. Without peace, there cannot be democracy, there cannot be development,’ she said.

A series of thoughtful questions from the floor ranging from the government’s position on Lesotho, Venezuela, the Rohingya crisis and the unfolding events in Sudan and Libya were ably fielded by the minister and her team which included Deputy Minister Luwellyn Landers and deputy directors – general.

The venue was packed with diplomats from around the world, students, staff and invited guests. The delegation remained for some time afterwards to engage informally with guests at the cocktail party in the Senate foyer.

Chairperson of the Advisory Board of the Gandhi-Luthuli Documentation Centre, Advocate Zandile Qono-Reddy directed the event and laid out its context.

The annual lecture has traditionally attracted high profile speakers and participants, setting the bar fairly high for the next one.

Anti-apartheid stalwart, lawyer and author, the late Dr Phyllis Naidoo was conferred one of the country’s highest honours, the Order of Luthuli by President Thabo Mbeki for her contributions to the struggle for democracy. An alumnus of the University of Natal, she received honorary doctorates from the University of Durban-Westville and the Durban University of Technology. Known for her indomitable spirit and commitment to the struggle, Naidoo passed away on 13 February 2013.

DR KUMI NAIDOO
Human Rights and Environmental Justice Activist
Topic: The Struggle for Justice is a Marathon and not a Sprint


WORKERS DAY BOOK FAIR WITH TEMBEKA NGCUKAITOBI best selling author of The Land Is Ours Land Matters: South Africa’s Failed Land Reforms and the Road Ahead. 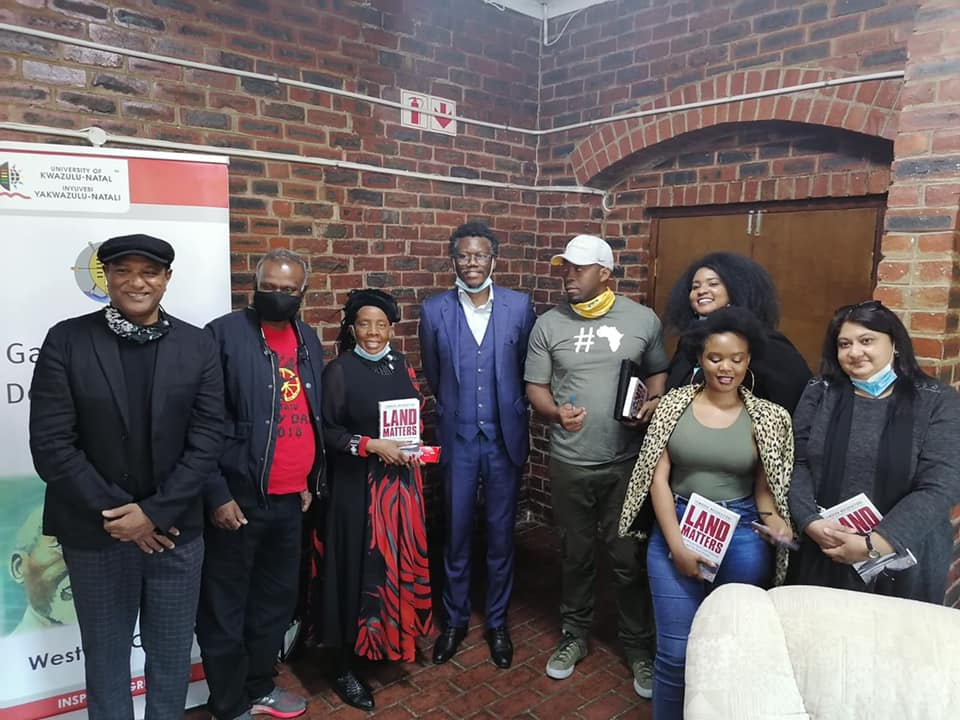